I have always enjoyed the DownBeat “Blindfold Test” feature in each issue, in which a famous or up-and-coming jazz musician is played one track each from several Jazz albums with no information, asked to guess the musicians and to candidly appraise the music. Partly it’s a machismo test: if you are a young cat, you want to be able distinguish your Hank Mobleys from your Dexter Gordons, or Roy Eldridge from Red Allen, or Jaki Byard from Charles Mingus playing piano (a not uncommon fakeout in the blindfold test annals). Then there is the tantalizing possibility of having someone offer a much more critical assessment of a famous musician then they might normally be expected to. After all, if the person is unaware of who’s playing, it can’t be a personal attack.

I have spent my life wishing someone would test me on these things. Having the reached the age of 48, I have come to the sober realization that I will probably never be anything remotely like a celebrity in the Jazz world, and thus will never get a blindfold test in DownBeat, much less the Holy Grail of something like being on Fresh Air. (By the way, can you imagine the disappointment of people who get booked on Fresh Air only to discover that they’re to be interviewed by Dave Davies? When they confide this to friends, they must say “I mean, nothing against Davie Davies (or David Biancouli who writes for TVworthwatching.com, or Lloyd Schwartz”), but… y’know… Terri Gross…” they say, wistfully.)

So recently I decided to take matters into my own hands.

Of course, I know my CD and vinyl collection and its various categorization schemes better than I know the birthdays of my immediate family. So first I set about creating chaos from order.
It is surprisingly difficult to achieve a state of blindfoldedness. I tried several bandannas, hats and towels, but nothing satisfied. I finally hit on a solution: I took out one of our typical suitcases and put it on my head. By zipping it up to my neck, I couldn’t look down and accidentally see a cover.

Having cleared a space in the middle of my studio, I began criss-crossing the room, taking stacks of records and handfuls of CDs from their shelves and blindly strewing them across the floor, intending to kneel down and further shuffle them around the room.
Almost as soon as I began, disaster struck. One of the bookcases full of lps was precariously balanced on a ledge, and when I pulled out enough records from the bottom, it became top-heavy and fell forward, taking me down with it. I was buried in records, with a heavy bookcase on top of me, and a suitcase on my head.
Fortunately Ezra was home, heard the crash, and my muffled screams, and came down to see what had happened. But not right away. He was very deep into a level of Team Fortress II that had just come online, playing with and against anonymous, faceless players from who-knows-where. So superior were his efforts on this particular occasion, his team had been granted something like immortality. In reality it was probably only twenty minutes. He later said that he could actually hear my muffled calls during this time, and for a moment was torn: loyalty to his father or to his blank, empty doppelgangers? But the moment passed, and he was at peace in sacrificing the one for the many.
At length Ezra came down and surveyed the scene. He remained calm. One might even say he demonstrated a curious lack of urgency. By and by, he recovered himself, and took out his phone. Someone must document this exotic travesty, he thought to himself. He busily circled around me, clicking photos. 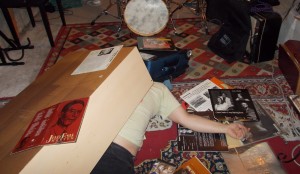 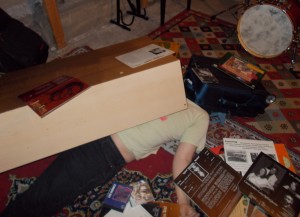 loss of feeling in one arm, dizziness, slight loss of appetite…

Finally he was persuaded – I may have kicked him – to lift up the bookcase and help remove the suitcase. I had failed my first blindfold test.

This entry was posted in Blindfold Test, Recordings, new and used. Bookmark the permalink.