…in the best sense of the word. Thursday, Friday and Saturday I played with a group Sarah Wilson put together, culminating in two sets at the Monterey Jazz Festival, taped for broadcast by NPR. I had been really, really keyed up to meet and play with three musicians I’ve long admired: Jerome Harris, who I saw with Sonny Rollins when I was about 19; Charles Burnham, a violinist long associated with one of heroes James “Blood” Ulmer, and Matt Wilson, a great drummer, bandleader and composer, who I first heard maybe sixteen years ago with my high school chum Andrew D’Angelo. Opportunities to play with people like this just don’t come all that often for me, and I was excited to do this. Moreover, opportunities to play original compositions with the same people for three consecutive gigs don’t come often either, and so I was really feeling fortunate.

But make no mistake, it was work. Thursday the guys flew in from New York, and we got right down to business with an intense three-plus hour rehearsal at Sarah’s place. Some twenty original pieces were very quickly gone through, forms discussed, strategies sketched. Then I loaded the drums and amps in my car and drove to Mill Valley for our show at the beautiful Throckmorton Theater, while Sarah piloted a borrowed van with Charlie, Jerome, and Matt. The gig was really good, though it certainly didn’t suffer from being over-rehearsed! The first tune of the evening had a guitar solo with bass and drums over a fast tempo before Sarah or Charlie played a note. At the outset, I felt my left hand sort of lock up – not completely unable to play, but just too tense to get much music out. I was nervous, tense, in a way I hadn’t been for quite a while. I had an opportunity to burn, and I definitely wanted to make an impression on all these (in my mind) “big-shot-cats-from-New-York”, but you don’t burn by saying you’re going to burn. You burn by being relaxed, loose and in the moment. After a few stumbling phrases I managed a reasonably okay solo, and proceeded to settle in from there. Sarah’s songs, which are very catchy and compelling, and the thrilling playing of the band pushed me into less me-focused territory.

The next evening we played for a packed house at the Red Poppy Art House in S.F., which means about forty people. I was nervous about playing with an exuberant quintet in a space the size of my living room, but it worked out fine. I love the Red Poppy vibe, and I always feel that the in-your-face intimacy of the place pulls something special out of me. The music started to open up, spontaneous moments of listening magic were given room to grow, and it started to feel like a band.

Home at 11:00 pm, unload all the drums and amps, and up the next morning for the two hour drive to Monterey. A beautiful day, with ample snacks in the car and Blood Ulmer’s Sun Sessions blues disc from 2001. (Townes Van Zandt: “There are basically two kinds of songs: blues and zippity doo-dah.”) We played two sets in a medium-sized nightclub-like room, to a large, rapt audience. Fun was had. Mistakes were made. Sarah’s singing was really inspired. The bright stage lights had us sweating profusely up there, which is secretly my favorite side-effect of gigs like this, even though I’m rank afterwards. I had another moment where I realized I was playing with tension, trying to get up in the groove of a fast tempo guitar solo. To be aware of it in the moment was a better result than the previous Thursday.

What was so moving to me was how supernaturally nice these three gentlemen were, and how respectful and attentive they were to Sarah’s compositions, while at the same time not holding back anything of themselves as creative musicians. This is also a testament to Sarah’s band leading: letting people be themselves, letting musicians play what they hear. I’ve been singing her songs in my head continuously since the last show! 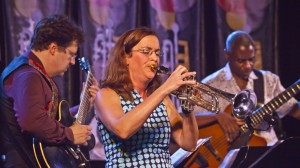 This entry was posted in Live Music. Bookmark the permalink.